How reliable is the Stelvio???

Joined Aug 14, 2018
·
9 Posts
I have a green TI Sport with tan leather interior. I've had it a couple of months and I have about 2k miles on it. I have quite a commute so I split the drive between a couple of cars and I drive the Stelvio about 2 times a week for commute and then at least once on the weekend. I can't tell you how much I look forward to my "Stelvio" days! This SUV is amazing. The 500hp version must be unbelievable to drive. I have had absolutely no issues. I did purchase a Go Pedal from Madness Autoworks (I have a Go Pedal on my Fiats as well). With the Go Pedal the Stelvio truly does take off like a rocket. I merge onto the Interstate where most drivers are doing at least 80mph since the speed limit is 75mph and I have absolutely no problems. I am a "car person" and have probably owned at least 20 cars over the last 20 years and I can say without a doubt that the Stelvio is my favorite to date. It is absolutely beautiful in addition to being a blast to drive.

Joined Oct 24, 2017
·
348 Posts
So, 15K and 11 months now.... absolutely no issues whatsoever. Love the Stelv as much as the day I drove it off the lot. Can't wait to push the button and grab the paddles every morning

Joined Oct 14, 2018
·
21 Posts
MoparBrian - I too would drive the stelvio for daily business. At this point, are you still satisfied with your Stelvio? Any major issues? I am thinking of getting one.

Joined Sep 30, 2018
·
65 Posts
Other than all pads and rotors having to be replaced right after purchase, all is well so far. All recalls and campaigns done before we took delivery 2 weeks ago.

Joined Oct 21, 2017
·
14 Posts
My first Alfa was a “62 black (red interior) Giulietta Spider that I bought in ’64. In really cold weather it would leak oil from the head. I solved the problem by placing a can in the appropriate spot to collect the oil. When the engine heated up, I’d pour it back in. The seat backs were flimsy and had to be repaired several times, but I loved that car. Wish I still owned it.
My second was a ’72 yellow 1750 Spider Veloce that broke down on a lonely country road the first night I drove it. Luck was with me, and because it was dark, I noticed some ignition wire or something sparking. Problem temporarily repaired, and I was on my merry way. Other than having to swap the SPICA fuel injection once for a rebuild, it ran like a champ. Wish I still owned it.
Next was a red ’86 Milano. Not as sporty but still a fun car. The rubber donut that connected the transmission to the driveshaft went cablooey after ten years, but that was it for problems. It was handed down to a couple of kids and lasted for almost another ten years.
So, I’m back to a black and red, this time it’s a Stelvio. Had it for a year with no problems except for the minor pesky recalls. It has become my favorite. Ok the backup camera sucks, and there might be some problems in the future, no doubt. But if you love Alfas like I do, you won’t be bothered.
PS
The guy who started the “ I HATE my Stelvio thread” ain’t woke.
M

Joined Jul 4, 2018
·
3 Posts
Just completed an approximately 2000 mile road trip over the past 8 days on a trip through the southeast US. Stelvio performed wonderfully with not any problem at all. Cruised comfortably. We even went though a few automatic car washes. Very pleased with the MPG as well a performance and reliability.

Joined May 6, 2019
·
61 Posts
Troll much? I have a friend with one of those Jags. His is supercharged. He only takes it to the drags. He says otherwise than going in a straight line for a 1/4 mile HE HATES IT! I haven't ridden in it but he swears it's the worst car comfort wise he has ever owned. Ergos are bad, and the ride is horrible, so he says. I've seen his trophies but gotta respect his opinion.
J

Joined 3 mo ago
·
3 Posts
I just passed my first year with no issues on my Stivio QV, amazing car
L

dangdang said:
Hey guys! I just joined this forum, and I am actually thinking about getting a Stelvio this year. However, I have some concerns about it. I mostly just drive to commute, but I do enjoy racing occasionally. I don't doubt about the racing part, but is the Stelvio a good everyday car? And how reliable is it? It would be very helpful if someone can tell me his experience of owning a Stelvio. Thanks a lot.
Click to expand...

I leased my Stelvio in mid November 2019. Build date September 2019. It is a 2019 base model, Wanted that because of the less radical front seat design (preference). Stromboli Gray with red leather interior, Nero pkg., 20" black Miron wheels with package with red brake Brembo calipers, sun roof, roof rails. 8.8" AM/FM HD radio with Nav. Heated seats, wheel. All season floor mats with carpeted mats as well. Many packages overlap. You can configure pretty easily. No adaptive anything!! Didn't want it. Glad you could purchase with out. It is drivers' car. Drive it. Don't play with needless toys!
So far 6,000 trouble free miles mostly in a New England winter and a sloppy spring. Tremendous in lousy conditions including snow and ice covered streets. Q4 system works seamlessly. Heating and A/C also strong and unobtrusive. I don't expect any problems. Outstanding engine and ZF transmission!! Intuitive handling response in all conditions.
The statements made about poor quality and "expected" quality of FCA products are old wives' tales and Consumer Reports rubbish! I also own a 2014 RAM Laramie Longhorn with every available option in 2014, including four corner air ride. Over 70,000 miles including much off road duty with no creaks or groans and NO problems of any type! By the way the RAM also uses a ZF transmission. Take that Ford and Chevy!
When you decide, Don't worry about it. Take good care of it and drive it, don't abuse it!
From a guy who has been, driving, riding and flying for over 50 years.
M

Joined Sep 16, 2018
·
11 Posts
18months and 56000km since I Drove out from showroom with my 210hp diesel Stelvio. Still all perfect, still wondering when the widely spoken reliability issues will kick in.
D

dangdang said:
Hey guys! I just joined this forum, and I am actually thinking about getting a Stelvio this year. However, I have some concerns about it. I mostly just drive to commute, but I do enjoy racing occasionally. I don't doubt about the racing part, but is the Stelvio a good everyday car? And how reliable is it? It would be very helpful if someone can tell me his experience of owning a Stelvio. Thanks a lot.
Click to expand...

I have owned a 2018 Quadrifoglio for 18 Months. It has 18K miles and has only seen the dealer for the 10K service. I give the car an A+ and continue to enjoy it everyday. Good Luck!!!
G

Joined Aug 9, 2018
·
21 Posts
I just drove my 2018 TI sport from STL to San Fran. I drove 1200 miles the first 2 days and 770 miles a couple days later. Car performed perfectly, used adaptive cruise most of the trip! I would also like to say, I have had no issues like others and I think it is because my car was serviced as soon as it reach the dealer. The early models had the water leak and I think once that happens you will have constant issues IMO. My only complaint... the Infotainment system. I have a very early model and the system is terribly slow, 15 seconds for the reverse camera off and go to radio after selecting drive. They just needed to spend another $10 on more processing memory. You can tell too, by the XM radio loses signal in 3 seconds, the other cars I drive in the same scenario will be 8 - 9 seconds.

milos said:
15 sec delay of rear camera is intentional... on newer model years it can be disabled in menu...If you dont have it in menu try updating software there is new version 002.010.041 for older infotainment hardware and 090.000.061 for newer inf. hw
Click to expand...

Milos - thanks for the info, Rear Camera Delay = Yes. I change it to No and working great. I had updated the software myself and thought I went through all the menus to reset to my specs. The new software makes the rearview camera picture much bigger, thought the slowness was tied to the update. Thanks again!

My dad owns a 1979 Alfa Romeo Alfetta GTS 1.6 and it's been sitting in our driveway in Cyprys for the past 30+ years. The GTS is a very beautiful and very rare car. It was a UK only special edition and was built in 1979/80. It's estimated that only 25 to 50 were made and currently, other than my dad's, only 2 exist in the UK, 1 on the road and one on SORN.

My dad is retired now and close to turning 70 so it would be a dream come true if I could restore his car back to its original beauty. Unfortunately, we don't have the funds for this project and therefore I'm asking for your help.

Please help me fund this restoration project so that we can bring another rare Alfetta GTS back to life. 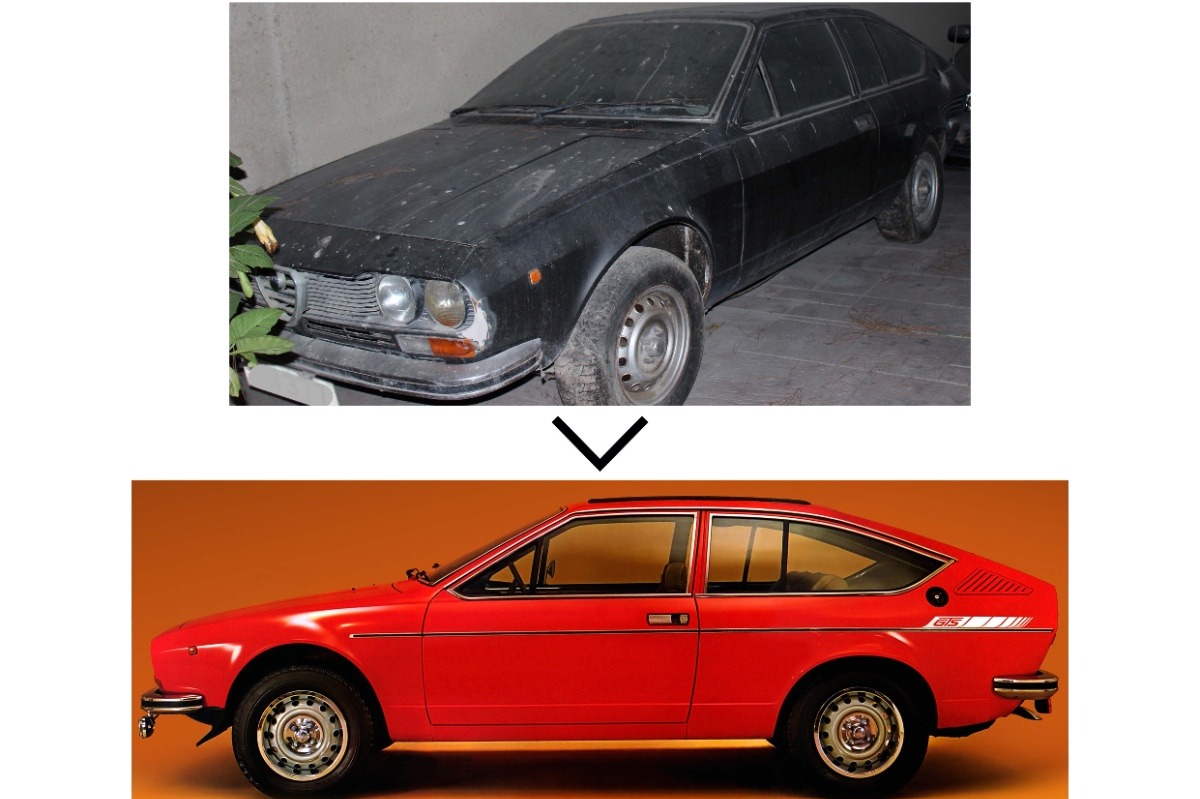